The Story of our Carving

The carving depicts a local legend and two well known ancestors throughout the area.

The legend begins with Maui-Tikitiki-a-Taranga who fished up the North Island with the jaw bone of his grandfather which he fashioned into a fish-hook.  The outline of the Hawke’s Bay Coast is in a shape of a fish-hook which takes the name Te-Matau-a-Maui represented by the fish-hook.

The local legend is Pania of the Reef.  Pania was a sea person but like a mortal woman in mind and body.  She married a young chief (Rangatira) named Karitoki who lived in a pa upon Hukarere Cliff.  Pania gave birth to a baby boy whose given name was Moremore, “The Hairless One”.

One day Pania took Moremore and visited her people out in the ocean. When it was time for Pania to leave and return to her husband her sea-people wouldn’t let her go.  To stop her from going she was turned into a rock which formed Pania’s Reef and Moremore was changed into a taniwha.  He is viewed as a Kaitiaki, a guardian and appears to people at times of warning.

Karitoki is the figure on the left side of the fish-hook with Moremore in the middle and Pania on the right side.  Under the hook is some of the sea life found around Pania’s Reef.

The figure above the fish-hook represents Te Orotu, origins of the ancestor from whom Te Whanganui A Orotu takes its name.

The kowhaiwhai pattern around the border is the Unity of Ranginui, the sky father above, Papatuanuku the earth mother left side and Te Moana-Nui-A-Kiwa right side.  The given name to this kowhai pattern is Pitau, fern fronds. 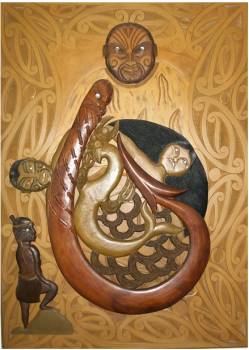